Moving towards a zero carbon diet: a discussion

Last Saturday I attended the ‘Zero Carbon Lancaster’ conference at Cumbria University.  The conference was organised by Kevin Frea (a resident of Halton co-housing and a director of LESS), and aimed to discuss the often forgotten issue of climate change.

As part of the day I coordinated a break-out session that explored zero carbon diets and what a zero carbon diet may involve. This session was based on the outcomes of a report produced by the Centre for Alternative Technology: Zero Carbon Britain 2013.

The workshop discussed what individuals and Lancaster could do to move towards a zero carbon diet and food system.

So, what does a zero carbon diet involve?

Moving towards a more plant-based diet and reducing food waste are two good places to start.

A lot of the workshop’s participants had already converted to a vegetarian or vegan diet, or had tried to reduce their dairy and meat consumption without eliminating both completely. In order to support this trend, and to learn how to reduce food waste, the need for cooking workshops was raised. Holding vegetarian and vegan community banquets was also suggested.

Who you live with and socialise with was said to be a key limitation to eating less meat and dairy.

LESS’s Local Food Pledge can help in overcoming some of these barriers, but

raising the visibility of local food was also suggested as another alternative.  A local food logo for example could make local food more visible and easier to find. LESS’s Growing Our Local Food Economy (GOLFE) project will hope to explore this option further.

The element of a zero carbon diet that some people had not considered was how food is actually cooked. Raw food- food that is not cooked- is best from an energy perspective. Microwaves are more efficient at cooking food than electric or gas ovens, but were criticised for destroying the taste of food and taking the fun out of cooking! Pressure cookers were raised as a good energy efficient cooking option. Storing boiled water in a thermos rather than re-boiling a kettle again and again was also recommended. 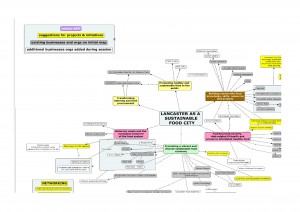 How do you strive to reduce the environmental impact of your diet?