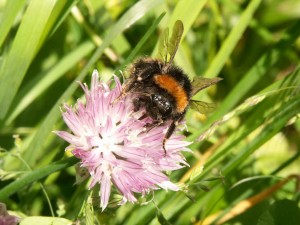 Apis mellifera, otherwise known as the honey bee, is the only insect that produces food eaten by humans on a commercial scale. It, along with other pollinators, also plays a key role in maintaining a diverse diet for humans.

By pollinating flowers and contributing to the process of successful fertilisation, bees allow high quality fruit and seeds to form. This helps in providing a good harvest and maintaining high biodiversity – maintaining a wide range of plants and animals.

By supporting greater biodiversity, bees are directly linked to supporting resilient ecosystems that are better equipped to dealing with traumas such as changes in climate.

A pollinator-dependent meal is also generally more nutritionally diverse than if made up solely of wind-pollinated crops such as cereals. According to the UN, 100 crops make up 90 percent of the world’s food supply and 70 percent of these crops are pollinated by bees!

Crops pollinated by bees include apples, pears, strawberries, rapeseed (also used for biofuels), and other important non-food crops such as cotton.

Sadly, a failure to understand the importance of the bee and other pollinators within our broader ecosystem has resulted in a number of scary scenarios. For example, Markus Imhoof’s documentary ‘More than Honey’ provides an interesting insight into what the world may look like if bees were no longer around. His documentary contains a scene which scans a blossoming apple orchard in Liaoning province in North-eastern China, with hundreds of workers taking on the role of the absent bees to hand pollinate flowers…(Humans are not as good as bees at pollinating flowers

Although this situation is not completely down to a lack of bees, but also the intensive monoculture of self-sterile fruit trees, it still highlights the importance of looking after pollinators; of avoiding chemicals that may harm bees; and emphasises the importance of growing a variety of crops and plant species rather than fields of just one plant.

So what can we do to support our little friends?