A question of scale? 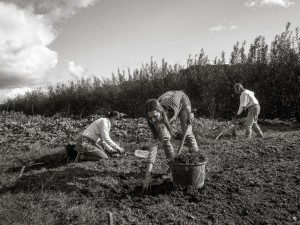 The Landworkers’ Alliance, in collaboration with the Centre for Agroecology, Water and Resilience at Coventry University,  have released a new report entitled “A Matter of Scale. The report highlights how a diverse and vibrant sector of small farms is providing employment, attracting new farmers, and incubating entrepreneurs.

69 small farm holdings of 20ha and less were surveyed to provide an insight into the diversity, productivity, financial viability and multiple benefits offered by such farms.  The report is also accompanied by five short films about key themes arising from the research and can be viewed online at: vimeo.com/landworkersalliance.

A recent BBC survey revealed that “over 70% of British growers say they would reduce their UK operations if access to key labour markets is restricted post-Brexit”.  However, the “A Matter of Scale” report offers an alternative vision for the future of UK horticulture.

Rebecca Laughton, author of the report, commented: “Many young people are attracted to the more varied, meaningful and skilled work offered by small scale organic and agroecological holdings, as opposed to industrial farm work which is perceived to be monotonous. Aspiring new entrants are motivated to learn about systems which address environmental challenges such as climate change, soil depletion and biodiversity loss, and prefer the friendlier atmosphere of small farms and market gardens, where they can learn a variety of skills”.   The report shows how organic market gardens, many of which are less than 5ha, are able to produce yields of certain crops that exceed those of non-organic growers.

Other key findings from the report include:

An increase in the number of small, agroecological market gardens, especially on the outskirts of urban areas, could help reduce the trade gap for fruit and vegetables, while providing meaningful all year-round employment for local people. To read the report in full visit: s.coop/25vwz