I recently met John Vendy and Sue Arnott, two beekeepers from Bentham, to learn more about natural beekeeping. It was a fascinating discussion, some of which I have drawn out below. 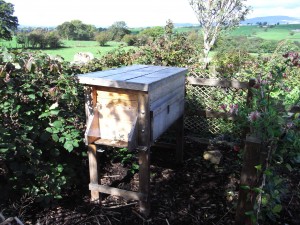 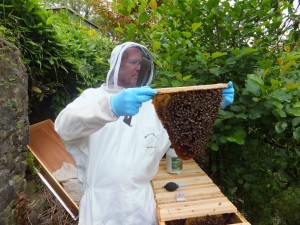 Anna: So what is natural beekeeping?

John: I would say it’s based on the observation of bees, and allowing the bees to live as naturally as possible. Putting nothing artificial into the hive and not taking anything out of the hive that they can’t afford to loose.

Anna: So on a day to day basis what are you doing?

John: Drinking wine and watching the entrance, as opposed to taking the roof off and rearranging all the furniture for them.

Conventional beekeepers are taught from late April through to the end of July, to open up the hive at least once a week to check for new queens. And if you find them destroy them or take an appropriate action – it depends on who you talk to re what they recommend.

As opposed to the probably 15 times a year that a conventional beekeeper will open the hive to check for various things and to take the honey away, I like to open up the hive once a year and that is for a disease check particularly. I do have some hives where I don’t take the roof off at all, but they all have another hive next to them where I can take the roof off. (So if one is diseased, the odds are the other would be as well).

Sue: My approach to natural beekeeping in a practical sense is just simply watching what is happening and providing support to the bees. Because, living where I do – kind of on the edge of what is sustainable for bee populations because of the climate and the availability of forage- I feed them over the winter time, which is an intervention. But I see it as a support for them rather than anything that will interfere with what they want to do.

John: Personally, from a natural beekeeping point of view, if you are feeding sugar to keep a colony alive because you have had a bad summer, there is no big deal about that. To me that is perfectly acceptable. If you are feeding them sugar because you have taken all the honey away, then you need to sit back and think again. You are taking away [their ideal] food that they have made themselves and that has been proven for millennia that it keeps bees alive very well. You are taking away a lot of the nutrition value by giving them sugar.

Anna: It sounds to me that observation outside the hive is the crucial work. How have you developed that skill?

John: One book – At The Hive Entrance – it describes what you see outside the hive and suggests what is happening inside the hive from the observations outside. It is available to download as a free PDF.

Sue: My learning has come from John! Learning from other people, other observers of bees, I have also found really helpful.

John: There are quite a few online communities of natural beekeepers now that are generally very supportive. The Bio Bees forum was started by Phil Chandler. There are no end of Facebook groups about Natural Beekeeping and the Natural Beekeeping Trust based in South East England somewhere also provides good information.

Anna: Why have you chosen natural beekeeping – what is your motivation to do this?

Sue: I have been vegetarian for donkeys years, I have worked for a conservation organisations, I try to live my life as ethically and sustainably as I can. And so just the whole factory farming of bees, the commercialisation of beekeeping and the interventions just didn’t sit easy for me, The reason I became vegetarian was because of factory farming methods and looking at the procedures that I was introduced to in that first weekend just seemed to me to be against what the rest of my life was about. That sounds very profound doesn’t it!? But you know, its important that if you are going to do something, you need to be comfortable about it.

Anna: I am lead to believe that there are some practices within conventional bee keeping that cause stress for bees, could you talk about this a bit more?

John: If you imagine bees in a hollow tree, they will settle in the hollow and they start building comb at the top and build down and down and down. In a conventional hive, they will start them in a box and when they want to expand them, they will put an empty box on the top. There should never be nothing above them, and so the bees immediately go up there and furiously start building comb and that becomes their main focus even to the point of not foraging as much as they could. They then start filling the empty comb with nectar to produce honey. Part of the system there is they use a queen excluder between the two boxes so they contain the queen in the bottom box so there are no eggs laid where they want just honey. So they are confining the brood nest if you like. So both of those are a stress on the bees that they wouldn’t normally have.

Then you get to the end of the season when they take the honey away. The bees have spent the whole summer gathering nectar to produce honey to feed their future sisters through the winter and then all of a sudden it’s all taken away. Sometimes it is not all taken away – a lot of beekeepers take some honey away and leave some for the bees to go through winter. But some take all the honey away and feed them with sugar water instead.

And then you get into opening the hive once a week to check queen cells to stop them from swarming. You alter the humidity of the nest, the nest scent – everything going on in their changes. Beekeepers get stung when they take the hive apart- nearly the only time. So that is obviously a stress to them – they are seeing an invasion into their homes. And then you have the treatments – acetic acids, oxalic acids, moving around for pollination…

Anna: For people who buy honey, if they want to buy honey from a beekeeper who is taking a more bee-centric approach, how can they access this sort of honey?

John: The first thing is: don’t buy it from a supermarket. If you look on honey you buy from a supermarket, generally it will say produce ‘of EU and other countries’, other countries is generally China – who produces 10 times more honey than there are competitors. Next to that, then find a local beekeeper. If buying from their doorstep ask them questions about how they keep bees. Talk to the beekeeper.

Sue: There is currently no labeling that will help you in regard to information about how honey is produced. Other than being able to ask the beekeeper, I guess working on the basis that small is often more beautiful – the scale of the operation is probably going to be more conducive to more respectful bee keeping, but not necessarily.

I think people also need to value honey much more than they do. Because when its a fairly cheap commercial commodity that you can buy in a supermarket, its just supporting those large commercial operations in China, or America or whatever – it devalues the product itself. When you think about how many flights a bee needs to do to produce a teaspoon of honey – its thousands- when you think of it in those terms, you appreciate how much effort goes into it. And if, for example my bee keeping, taking honey on the scale I do – when a colony ceases to exist, on that basis there is no constant supply of honey. It would be very difficult for someone like me to sell my honey- my customer could go four years before they could get any more! So it is very difficult to advise an ethical consumer about how they should approach getting their honey – it’s not easy! Our style of beekeeping isn’t about honey production is it!? There is no easy answer to that.

John: I look to large scale honey production the same way as raising battery hens or intensive reared cows in a shed. People are shying away more and more from that type of production. There is no reason to treat honey any differently. Its another living animal- an insect- another living thing. Like you say, appreciating it more and understanding the production methods going on more would make people stop and think a bit.

Sue: And to not see it as a staple part of their diet. Just valuing it more.

How can people who don’t keep bees, support natural beekeepers like you?

Get in touch with a bee keeper who doesn’t have space to keep bees. Local Bee Keeping Associations can help, they are often looking for opportunities for extra sites to keep bees.