Learning from the ‘marginal’ lands

In this week’s column Dr. Dorian Speakman writes about the marginal lands project. 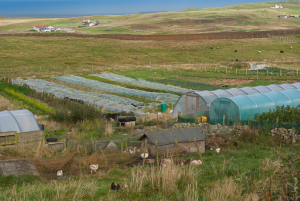 2018 already has been a rough year for farmers in Britain. Winter dragged on into March and very wet weather in March in the agricultural heartlands of Yorkshire has left many fields flooded weeks after, with farmers saying they were up to a month behind with planting. We just have to hope it is not a repeat of 2011-12 when over £1 billion of weather related losses were reported by UK farmers.

Meanwhile, Lancaster is surrounded by the bare slopes of the Bowland Fells and Pennines, which get a hefty share of Britain’s rainfall. You might think that not much will grow there, but you’d be surprised. Some people have grown fruit, vegetables and even exotics high in these hills. Above Wray, Backsbottom Farm is growing over 200 varieties of apple tree on a damp Bowland hillside. A farm high in the Dales had salad and fruit and beans out in the open at an altitude of 380m (1250 feet), with rainfall one and a half times that of Lancaster (1550mm). Over in the Welsh Mountains, Welsh Mountain Cider have proved that growing cider apples and pears and selling tough trees can be a commercial activity. Given the trend for erratic weather, maybe we can learn something from these people in how they adapt to reliably rough weather conditions?

These food producers, scattered over the north of England, Scotland and Wales have been part of the Marginal Lands Project, where the ideas and innovations (often using permaculture), for growing in tough climates can help others deal with unseasonal weather.

So, take the Shetland Islands, lying at 60 degrees north with the north east Atlantic on one side and the northern North Sea on the other: you wouldn’t expect it to be particularly rich in exotic foods. It isn’t. But in fact, a market garden there provides the islanders with chillies, garlic, aubergines, peppers as well as salads, potatoes and leeks. When a place is accustomed to gales gusting over 100 mph in winter, is on exposed, tough terrain with the barest of soils and can get a lousy sunless summer, you know that something quite remarkable is happening. Not only that, but these food growers produce their fruit and vegetables using as little energy as possible, organically, to produce healthy good local food.

The key to adapting is to use low cost small scale adaptations: it might be netting to break up wind, trees to soak up extra moisture, or planting local varieties that can thrive in the local climate.

For more information about the Marginal Lands project see www.marginallands.org.uk