Kathy Barton talks about her history with food waste…

My father grew up in America during  the Great Depression. I was therefore  raised in a culture where nothing was  wasted. The butter paper and jam jars  were scraped for every last morsel. We  ate old fruit first which meant the fresh  fruit became the ‘old’ fruit by the end of  the fortnight. Fruit that past its prime  became fruit crumble.

Every Saturday was left over day. Since  we all ate together, everything came out  of the fridge and was heated up. A piece of pork chop would be carefully divided into 6 portions. Roast beef would be chopped up and put in gravy to be put on toast. Odds and ends of veg would be made into soup with some stock, with left over rice or pasta going in as well.

We never had snacks, only three meals a day, so what was put on the table was eaten. There was rarely a chance for food to go mouldy. If there was a spot on the cheese, it was carefully removed leaving the remainder good as new.

My mother shopped according to a list, buying only what she knew she would use. Of course, we didn’t have quite the food selection we do now and we were on a budget. Maybe this is why we never wasted food?

Today so much food is thrown away every year. As I ride my bike, I dodge apples laying littered in the gutter, having fallen from an overhanging apple tree. 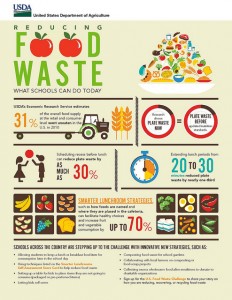 I have several university students as lodgers. I see tubs of margarine being thrown in the bin when there is enough margarine left inside to cover several pieces of toast. I spot half a loaf of bread in the rubbish bin too. Why don’t they freeze half of it if they think it will get stale before they can eat it all?

I see soft tomatoes going off. Why not cook them for a few minutes with some onion and herbs to make a tasty sauce? With all the cooking programs on TV, isn’t there one that will show people how to use what’s in the fridge and the cupboard?

What makes us a nation so willing to throw out perfectly good food? Are we too busy to be creative with leftovers? Have we lost the skills needed? Do we believe leftovers are a health hazard? Are bargains making us buy more than we can use?