When more food was local and seasonal 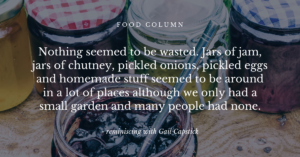 Gail Capstick, active Food Citizen, FoodFutures network and LESS director, reminisces about the cognitive and sensory memories of people growing food and knowing what to do with it.

I remember the seasons and the food that came at different times. I knew what came and went and when. A lot of food was more local then. In Morecambe and the surrounding area there were plaice, shrimps and mussels from the sea, homegrown potatoes, blackcurrants, sprouts, fresh strawberries, raspberries, gooseberries, apples and mint for mint sauce.

I remember being sent to pick sprouts in the winter for Sunday lunch and my fingers struggling with the cold as I tried to liberate the green balls from the thick stem. I knew that potatoes my dad had grown got a bit more withered as the winter went on. There were gooseberries in a lot of gardens although we didn’t have them at ours. Even now I remember some large prickly gooseberry bushes at some houses and people with an excess of these and plums giving them away.

Quite a bit of sharing went on. When my other grandmother or another relative made jam, things were shared around. Nothing seemed to be wasted. Jars of jam, jars of chutney, pickled onions, pickled eggs and homemade stuff seemed to be around in a lot of places although we only had a small garden and many people had none.

What is now called foraging was done by a few people although it wasn’t called that then. It was just what some people did. I did some of this as a young mother though my friends didn’t. As my children gradually grew I trained and got a ‘professional job’ with no thoughts of growing anything other than herbs and often not much time for that.

We are now subject to threats associated with climate change. There is wider concern around food miles and food security and the queue for allotments is growing. Groups like FoodFutures, new initiatives like FarmStart, and the proposed Morecambe Bay Curriculum bring the prospect of North Lancashire residents learning about local and seasonal food again.