Rod Everett from  Backsbottom Farm talks about the Juicy Apple project and how you can support it.

Apples are an important part of our Lancashire heritage with orchards common throughout the county. In Roeburndale, near Wray, there is now a collection of over 200 varieties of apple grown organically.

The collection includes the large Minshull’s Crab apple (a cooking apple), which dates back to 1777 and grows alongside Lange’s Perfection from Wigan – from approximately1983. Scotch Bridget is a rich, creamy, crisp cooking apple and was common in most Lancashire orchards. Ribston Pippin, a late desert apple from Yorkshire, dates from 1707 and Annie Elizabeth, an apple that keeps until April, has a sweet, light flavour and is esteemed as a stewing apple. For more information about the full collection see www.rodspermaculturets.co.uk/current-projects.

Keeping these old varieties helps us to maintain the genetic diversity that may be important for future local apple production. And many of these old varieties are back in our local orchards, having been grafted from scions (shoots), taken from the trees at Backsbottom Farm.

Hilary Wilson and Phil Rainford, local apple experts, helped to collect the old varieties from around Lancashire and Cumbria. The first trees were planted in 1985 and the varieties have expanded each year to include many unusual varieties that may be suitable for our climate in the future. The Countryside Stewardship Scheme and Lancashire County Council have also helped to set up some of the orchard areas on the farm which enhance wildlife and preserve old varieties of apples.

All our apples are organic and so use no herbicides or pesticides.

Organic apples are good for juicing as you can use the whole apple (less pips). This offers a range of health benefits such as antioxidant and anti-inflammatory properties. The American Institute for Cancer Research also reports that apple peels contains a third or more of the fruit’s compounds thought to be useful in fighting a variety of cancers.

The 2016 ‘UK Pesticides Residues in Food Organisation’ report on apples tested 70 non-organic samples and found pesticide residues in 65 samples. Of these, 57 contained multiple residues which were made up of 23 detectable pesticides. An additional sample of 26 organic apples contained no residues.

If you want to support the Juicy Apple in growing organic and heritage apples, you can buy 10kg boxes of mixed variety apples from Backsbottom Farm. These cooking and dessert apples are delivered once a fortnight and are especially suited for juicing. If you would like a 10kg box for £19 delivered free along the route from Bentham to Lancaster, contact Rod Everett. Email backsbottom@phonecoop.coop or ring 01524222214. Download a booking form here: juicy-apple-booking-form 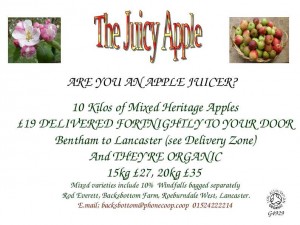