A couple of weeks ago I found myself sitting in an audience listening Satish Kumar talking about soil, soul and imagination; three of the most important things to cultivate he argued.  It got me re-thinking about soil and how we are so dependent on something we rarely give much thought to. 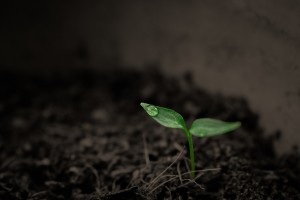 For those who don’t know, Satish Kumar is a former monk and a peace and environmental activist. He is perhaps best known for walking more than 8,000-miles from India to America on a ‘peace pilgrimage’ where he delivered a packet of ‘peace tea’ to the then leaders of the world’s four nuclear powers: Moscow, Paris, London and Washington D.C. He is now an editor of the Resurgence and Ecologist magazine and has recently published a book on soil, soul and society that discusses the connection between the three. Satish argues that everything is soil (or soil transformed). That soil brings life.

So why don’t we celebrate and talk about soil more?

Soil has been in the media headlines several times over the last few years, but rarely for positive reasons. In 2014 for example it was stated that “UK farm soils only had 100 harvests left in them”.  The latest depressing soil statement was made by Michael Gove, who warned that the UK is 30 to 40 years away from “the fundamental eradication of soil fertility…We have encouraged a type of farming which has damaged the earth”. This statement was made during the parliamentary launch of the Sustainable Soils Alliance (SSA) in October 2017.

The SSA is a new partnership made up of businesses, campaigning organisations, academics, governmental and non-governmental organisations who aim to work together to reverse the current soil health crises and restore the health of the UK’s soils is one generation. It also aims to hold the government to account. With this new initiative came supportive murmurings from the National Farmers Union (NFU)  – hopeful signs given the NFU’s track record in supporting the intensive farming practices that have led to soil degradation in the first place.

It is great that healthy soils are starting to be taken seriously by Michael Gove and Co., but there are many who have always known the importance of soil. The Soil Farmer Competition, organised by the Farm Carbon Tool Kit, ‘recognises and celebrates these people; aiming to find the best farmers and growers who were engaged with and passionate about managing their soils in a way that supports productive agriculture, biodiversity, reduces greenhouse gas emissions and builds soil organic matter and carbon’. Entries for 2018 close on the 5th March.

To find out more about how we can better look after our soils visit farmcarbontoolkit.org.uk