In this week’s column Sam, from Transition City Lancaster, talks about bananas. 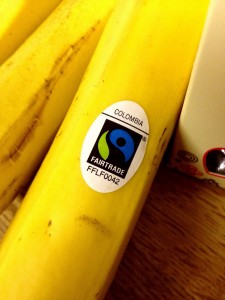 A strange thing to be writing about in a local food column, but I guess we all eat bananas.  Well, I do,  so it’s useful to think about where they come from.

In his book “How Bad Are Bananas?: the carbon footprint of everything”, Mike Berners-Lee helps us  to un-pick some of the confusions around this subject.  My own understanding is that while bananas,  tea, coffee and other regular foods come from a long way away, they tend to come in ships and they  tend to travel slowly.  This seems to be a different business to sugar snap peas that are flown in from  Egypt (and therefore have a massive carbon footprint).

So, while bananas are definitely not local, they are apparently not as ‘bad’ as some imported foods in  terms of their carbon footprint.

But why bother with organic or Fairtrade bananas?

In a way it is simple. If our fruit and veg is NOT organic then, by definition, it has had pesticides and other chemicals used in the growing of it.  Many people are wary of eating these various chemicals as they are bad for their own health. What is also certain is that chemical-based growing is bad for the health of the soil, while organic growing cares for and feeds the soil.

If we humans destroy the health of the soil we will be in big trouble, we will go hungry! Worldwide there are already vast areas of over-worked soil where nothing grows anymore.

It’s the same with Fair Trade.  Basically if a product is NOT Fair Trade then it is likely that the workers who produced the product have not received a fair wage and may have been seriously exploited in producing that crop.  The worst-case scenario is that the health of workers’ has been affected by chemicals and the workers’ over-exploited.

So, as I approach the array of bananas on offer in shops, the choice is mine: Am I going to buy into chemicals that damage the soil and the exploitation of workers, or not?

Organic and Fairtrade bananas will probably cost more.  However, I could just buy less of them and fill up on whatever is local and seasonal.

Here in Lancaster our local fruits currently include apples, raspberries, plums, gooseberries, pears, blackberries, blackcurrants, damsons, quinces, strawberries, blueberries, redcurrants . . . and probably many more.  In an unheated polytunnel or glasshouse, peaches and grapes have also been known to ripen here!