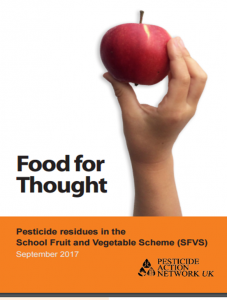 I recently read the Pesticide Action Network UK’s (PAN) report ‘Food For Thought’ which claims that a “daily cost of 1p extra per child could end schoolchildren’s exposure to cocktail of pesticides”.

This equates to roughly £5.6 million per year – an amount which could allow for all of the core produce given out through the Department of Health’s School Fruit and Vegetables Scheme to be switched to organic.

This government scheme currently sees approximately 2.3 million four-to-six year olds in England receive one piece of fresh produce per day as part of the £40 million scheme. This is a great initiative in terms of increasing the amount of fresh fruit and vegetables young children are eating. But the ‘Food For Thought’ findings are worrying considering evidence that young children may be at a higher risk from the combined effects of multiple pesticides. (There has currently been little research into this ‘cocktail effect’ and there is almost no understanding of the long-term health impacts.)

PAN UK analysed the results of government testing of the produce supplied through the scheme between 2005 and 2016. In two-thirds of the items tested, residues of more than one pesticide were detected, with some individual samples containing as many as thirteen different chemicals. In total PAN found that the fruit and vegetables given out to four-to-six year olds contained residues of 123 different pesticides. These were said to include suspected endocrine disruptors which interfere with hormone systems, known carcinogens, and organophosphates that can negatively affect children’s cognitive development.

These findings come at a critical time as the UK reconsiders its pesticide laws post-Brexit. For decades, pesticide standards have been decided in Brussels and there is widespread concern that they will now be weakened to please the agrochemical industry, resulting in more chemicals in British food.

Nick Mole from PAN UK commented: “Our aim is not to alarm parents but they do have a right to know what chemicals are in the food being given to their children. While we applaud the Department for Health’s efforts to get children eating more fruit and vegetables, our research shows that the produce they are being given is generally worse than on the supermarket shelves. Given how little it would cost to switch the scheme to organic, the government shouldn’t be putting our children’s health at risk when there are other options available.”

PAN UK is calling on the Department of Health to start monitoring the health impacts of pesticide residues in food, particularly on vulnerable groups such as children.

To read ‘Food For Thought’ and to find out more about PAN’s work visit: www.panuk.org