I recently attended a very inspiring gathering in Cluj-Napoca, Romania, that formed the second Nyeléni Europe Forum for Food Sovereignty.

The forum saw small-holder farmers, food producers, NGOs, indigenous peoples, activists and researchers from around the world gather together to discuss, cooperate and coordinate the European-wide food sovereignty movement (in more than ten languages!) The forum aimed to enhance existing food sovereignty initiatives and strengthen the movement’s work at local, national, regional and global levels.

The movement was launched in 1996 by the  international peasants’ movement La Via Campesina   during the FAO World Food Summit in Rome. Since  then, food sovereignty has played an increasingly  important role in the debate on agriculture and  alternatives to neoliberal policies and discussions  around food security.

“Food sovereignty is the right of peoples to healthy and culturally appropriate food produced through ecologically sound and sustainable methods, and their right to define their own food and agriculture systems.”

This admirable vision is a far cry away from our current industrialised food system which emphasizes profit at the expense of the broader environment and the welfare of workers and animals. There is however a growing movement around the world that is practically demonstrating how food can be grown and distributed in a more sustainable way – for people, the environment and animals. The food sovereignty forum in Romania was full of inspiring individuals and projects that are involved in these alternative food production systems. They were keen to share their stories and experiences and were determined to create a food system that is good for both humans and the planet.

Food sovereignty is also a term that describes a policy framework that is advocated by farmers, peasants, pastoralists, fisherfolk, Indigenous peoples, women, rural youth, environmental organisations and other supportive organisations from around the world.

At present the UK branch of the food sovereignty movement – the Land Workers’ Alliance- is pulling together a post-Brexit Agricultural policy for the UK that has had the input of many sustainable food practitioners and farmers. You can see the results of consultation work conducted around this by visiting the Land Workers’ Alliance website landworkersalliance.org.uk. 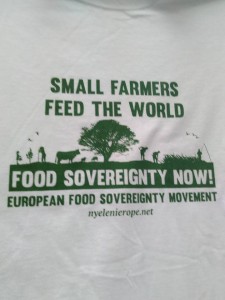