Beetham Nurseries, located near Milnthorpe, discusses how the business has developed over the years. 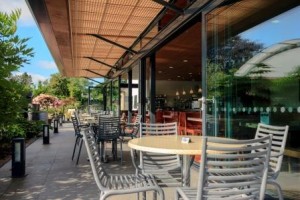 “From its humble beginnings as a small field and  single polytunnel, to an award-winning family  run garden centre undergoing an exciting period of  expansion, Beetham Nurseries has seen a number of  changes over the years.”

“Stephen and Lesley Abbit founded the business in  1984 with an initial focus on plants, and to this  day that focus hasn’t wavered. While plants have always remained the company’s raison d’être, changing times have inspired the creation of a number of foodie spaces within the centre…”

“Development of a food centric side to the business began in 2001 with the building of the Beetham Tea Room. Seating just 40, its growing popularity rapidly sparked the need for a bigger space. This came in 2010, when the Garden Café made its debut. With local produce at its heart, ingredients are sourced from a range of nearby suppliers, with emphasis on free-range food that’s freshly prepared on site. The Garden Centre’s rural location means such produce isn’t hard to find.”

“As well as functioning as a bustling eatery during the day, by evening the Garden Café is often host to some of Beetham Nursery’s regular events. In the past these have included floral demonstrations and talks on everything from vegetables to bees.”

“The addition of a café also saw the space, once used for the Beetham Tea Room, occupied by another new foodie addition to the garden centre.”

“A Garden Food Shop now stands next door to the café and provides the opportunity for visitors to stock up on food sourced near to home and abroad.  While the focus is on local produce – companies such as Hawkshead Relish, Kin Toffee Vodka, and Nook Farm Honey are all stocked on the shelves – there are items from slightly more far flung climes as well.”

“The shop also stocks brands which may not be so easily found elsewhere: Seggiano, named after a small village by the same name in southern Tuscany, is one such example. Founded 20 years ago and initially known for their Olivastra Seggianese extra virgin olive oil, over the years the small Italian brand has expanded into raw honeys, organic pasta, balsamic vinegar and more. Away from its native Italy, Seggiano products have found a space in the Beetham Garden Shop, which is open from Monday to Saturday between 9am – 5:30pm; and on Sundays between 10:30am – 4:30pm.”

To find out more about Beetham Nurseries visit: www.beethamnurseries.co.uk