Laura Atkinson from LESS, talks about her experience of making a 100% locally sourced meal.

This week I made a meal. Well a few actually, but this meal was created using 100% locally sourced ingredients.

In trying to design a locally sourced meal, I eventually decided to make a Spanish Tortilla, which in essence is a fancy omelette that can be made using locally sourced ingredients only- local to Lancaster.

The Spanish Tortilla is a traditional Spanish dish. It can be served hot or cold as a main or appetizer.

According to a website dedicated to the dish it was created out of necessity.

A Spanish military man by the name of General Zumalacarregui found himself in Pamplona, Spain, and hungry. He demanded food from a local resident who only had potatoes and eggs. Unknown at the time, the resident made a ‘Spanish tortilla’ that satisfied the general who went on to promote the dish around the country. It grew in popularity until it became part of the Spanish culture.

For my locally made Spanish Tortilla I bought: butter, eggs, red onions, potatoes, tomatoes, bacon, and cheese. All ingredients were bought from farms and businesses based in Lancaster district.

The butter was bought from Carren Farm. The eggs were from a farm in Longridge. The red onions and potatoes were from Pilling. And the tomatoes were from Claver Hill Community garden based in Lancaster, and had a superb flavour which proved to be a real hit with my family. The bacon was sourced from Bowker’s Butchers, who source all their produce from local farms. The cheese was from Proctor’s cheese, made in Chipping near Preston. They sell their produce on their website, www.proctorscheese.co.uk, and at local markets around Lancaster district.

Proctor’s Extra Mature Cheddar Cheese really topped off the dish – providing a lovely boost in flavour and a crispy top to the Tortilla.

All in all the meal cost approximately £5 and the ingredients were all easy to find locally and online- via the Lancaster Food Assembly.

It was a dish that was full of flavour, used local ingredients only, and was easy to make.

So why don’t you give it a try?

You could also add alternative or additional ingredients such as leeks, carrots and, for those of you who enjoy a little bit of heat, you could add a finely diced chilli pepper – locally sourced of course!

If you have any favourite meals that you make using locally sourced ingredients only, why not send them to LESS so that we can share them? Send them to food@lessuk.org 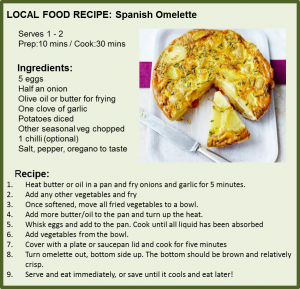