Introducing Leo Burtin and the The Common Kitchen project… 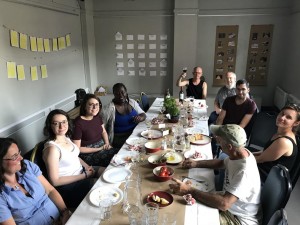 The Common Kitchen is an artistic project that opened on the 2nd July at King Street Studios, Lancaster and runs until the 14th July. The project forms part of a series of artworks I have developed since 2012 under the collective title Homemade. Pieces in the Homemade series include theatre shows, street performances and publications. What they have in common is that they all involve food in some way.

As a theatre maker, I first became interested in incorporating the preparation of food within my shows as a way to reach out to a wider pool of audience members. It was my hope that if you thought theatre might not be for you, the offer of a meal as part of the experience could tempt you.

I very quickly realised that creating artworks which encouraged diverse participants – groups of strangers, if you will – to eat together encouraged unique interactions. Sharing food as we gather around a particular theme, set of ideas or concerns seemed to become a powerful way to build community, and to highlight what becomes possible when we take time to share with one another.

Ever since these early experiments, I have been looking for ways to develop methods which bring together creativity and eating together to instigate social change.

During my time at King Street Studios, I invite anyone who wishes to, to join me for lunch for just one hour, between 1 and 2 p.m., and each day we spend that hour exploring a particular theme together. So far, we have talked about ‘eating the weather’, which led to many thoughts about climate change; ‘exchange’, which made us think about how recipes transform as they get passed down from one cook to the next and many others.

At the end of the project, I will be putting together a book which will feature recipes donated to the project by people nationwide and essays on some of the themes explored during my time at the gallery.

As well as sharing lunch, the programme at the Common Kitchen features a number of special events, notably a guest performance by Melbourne-based artist Alisa Tanaka-King. Entitled F.O.C.U.S., Alisa’s project takes place all over the world (she has so far been to Chile, Finland and will be going to London after she leaves Lancaster). F.O.C.U.S will showcase local, seasonal and foraged ingredients and will use the traditional form of Japanese haute cuisine kaiseki to foster a conversation on sustainability.

I hope you will consider visiting us at King Street Studio.