Last Thursday I joined a small group of Lancaster residents in cycling to Cuadrilla’s fracking site at Preston New Road to join Reclaim The Power’s ‘Block Around the Clock’.

The event was beautiful in every sense. It was well attended by a variety of caring and committed people and was extremely well organised with a range of interesting workshops, activities and performances being held over four days. The atmosphere was buzzing with good intention and, most importantly, the entrance to Cuadrilla’s site was blocked for 54 hours – preventing any trucks from entering or leaving. 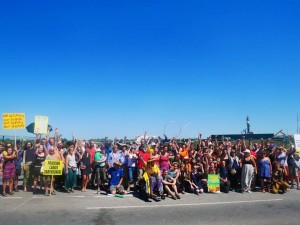 In cycling to the fracking site, we passed large swathes of farmland and I couldn’t help but feel increased amazement and anger at how a fracking company could be granted permission to drill in such fertile land. With the UK only producing <50% of its own food needs1 and Brexit looming, why would a fossil fuel company be permitted to drill in the middle of precious local farmland? 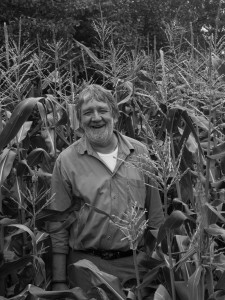 Alan Schofield, a local organic grower based in Pilling has previously spoken out against the fracking industry commenting:

“As a Lancashire vegetable farmer whose livelihood depends on the health and well-being of our soils, I am shocked that this development has been allowed…The good people of Lancashire said no to this development, only to be overturned by central government. We are not just fighting an unwanted and highly polluting industry, the whole of our democratic process is at stake.”

Members of the Landworkers’ Alliance (LWA) have also spoken out against the fracking industry. Liz Humphrey from the LWA stated:

“The fracking industry’s international legacy in the US and Australia to date is the permanent contamination of fertile land and critical water supplies…Livestock are often the first to suffer the effects of air and water pollution, and the standard response to the devastation of herds is denial rather than compensation.”2

On top of the direct local environmental impacts posed by fracking, ‘climate chaos’ and what this could mean for local food production feels ever more relevant with this past winter’s snows and the ongoing freak dry spell. A number of local food producers have pulled out of Lancaster’s past two seasonal markets because of a difficult growing season.

These unpredictable climate patterns look set to stay and will only get worse if we continue to allow the fossil fuel industry to expand. The need to keep fossil fuels in the ground and embrace renewable energy is now!

As United Utilities encourages us to reduce our water consumption in order to avoid a hosepipe ban, I question whether Cuadrilla will similarly be asked to reduce its water use? 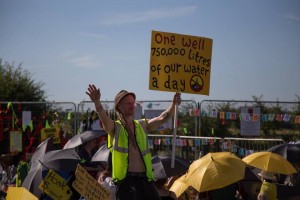