Growing with nature: a lifestyle not a job

Theresa Erti, a GOLFE project volunteer, talks to the man behind “growing with nature” in Pilling.

For more than 20 years Alan has been a farmer in the Lancashire area.

After setting his life goal to become a farmer he worked for many medium and large conventional farms, but their ethos did not convince him: 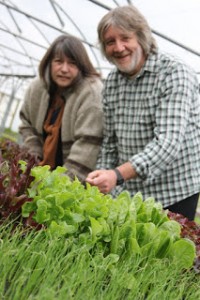 “When I realized that we were putting dangerous chemicals onto our food without even questioning it, and when I saw that I was working in an industry that has a blind eye for these issues, I just walked away and said that’s enough.”

But he did not just want to get away from it. He wanted to create a more sustainable solution to the problem itself. He decided to become an organic farmer and set the goal of establishing a sustainable agriculture business.

This dream has come true for him in Lancaster, where he founded “Growing With Nature”, a farm based in Pilling that offers a veg box delivery scheme. Together with his wife he has been growing food that is organic and sustainable both for the environment and people, and sells his produce throughout Lancaster District. He has managed to live comfortably off the profit from his organization, but has always refused the idea of accumulating money: “No one has become rich off organic farming, but I was never after money. Doing organic farming is more than just a job – it is a lifestyle choice that one makes; a choice that I have made.”

Having sold organic fruit and vegetables for such a long time, Alan has gone through many ups and downs. One of the biggest downs was the economic crisis between 2007 and 2009. Before 2007 more people were buying from him and were convinced about “green” farming. During the recession many of these costumers stopped buying organic food.

“Slowly customers are coming back but it is still a question of what is most important to people: price or the quality of their food.”

When Alan explains why his produce is so special he uses the example of handcrafted art: “Our fruit and vegetables are more like handmade products since we are not able to use the technology that big conventional farmers are using.”

This is the reason his products need a lot more resources such as time and labour compared to those needed on industrial farms. But at the end of the day they are more in tune with nature and can offer a healthy supplement to our daily diet in addition to providing more local jobs.

Now it is on us to decide what lifestyle we want to pick.