Michael Hallam from the Small Green Consultancy talks about the Food Loop Game and how food shoppers are encouraged to play with their food. 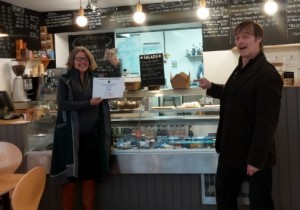 What better way to encourage more local spending, than to turn it into a game?  That’s what the  Growing Our  Local Food Economy (GOLFE) project has done  with its Local Food Loop Game.

The aim of the game is to turn customers into players, by encouraging them to  submit receipts  from food  purchases. These then get converted into points.  And, as we all know, points mean  prizes!

Last Friday Dawn Keyse, a Food Loop Game player, collected a £10 prize for  quadrupling her  spending points  before anyone else- a challenge set by the  game. She collected her prize in the  recently opened Radish café and  deli on  New Street.

Prizes are small and are awarded for fun. However, the real aim of the game is to build upon the work done by the New Economic Foundation on ‘the local multiplier effect’. (Money spent with locally owned and run businesses is more likely to stay in our local economy longer as these businesses go on to buy from other local businesses). The Food Loop Game is designed to test this theory by encouraging local businesses to participate in the process and demonstrate that they are managing to re-spend their customer’s (player’s), money with other local suppliers. When they do this their customers (that are playing the game) get additional points. 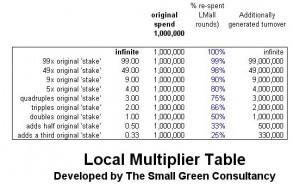 Essentially the Food Loop Game tries to make our money work harder in our own local economy.

Over time we expect the positive feedback evidenced by the game to encourage more local businesses to source and spend more locally.

To find out more, or to play the Food Loop Game, visit lancasterfoodloopgame.weebly.com