On the 10th September LESS’s FarmStart feasibility report was launched alongside the Feeding Body and Soul exhibition at the Storey Institute. 27 people attended the launch event, representing the FarmStart report’s key sponsors, Lancaster City Council, potential local partners and individuals interested in becoming commercial growers. Jo Payne from food campaign group Feedback, also attended to share her experience of going through Kindling’s FarmStart program in Manchester. Jo described the steep learning curve she underwent from having never grown food before in her life, to managing a third of an acre with her brother – selling direct to Manchester Veg People and supplying a veg box scheme for family and friends. All of this was done on top of a full time job! 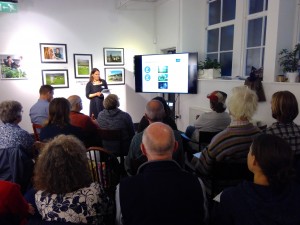 Jo described how she was introduced to a network of supportive individuals through Kindling’s FarmStart program, and how she eventually gained access to a bowling green in Manchester which is slowly being turned over to vegetable production. By going through the FarmStart program Jo also came across other employment opportunities- including her current role with Feedback- highlighting the scheme’s additional benefits. LESS is now seeking a suitable site to develop Lancaster’s FarmStart project.

Following this launch event, the Feeding Body and Soul exhibition was on display at the Storey, Radish, Roots and Cornerstone throughout September and, due to popular demand, will stay up in the Radish (Forest garden theme), Roots (community growing theme) and Cornerstone (local fishing theme) until the end of October 2018. Unfortunately the Storey part of the exhibition (women in farming theme) has finished, but we hope to make it available online at www.foodfutures.org.uk

To tie in with the exhibition, Dr Dorian Speakman held a discussion on the ‘Marginal Lands’, which challenged perceptions about what can be cultivated in more extreme climates – especially when a farm is carefully designed to create suitable micro climates. We heard about a market garden in the Shetland Islands that works with 100 mile per hour winds, and of growers working on the edge of the moors above Hebden Bridge. Well placed wind breaks, earth works, poly cultures, and adapted appropriate technologies support these ventures in growing. It appears much can be learnt from those growing on the margins when facing increasingly more unpredictable weather patterns.