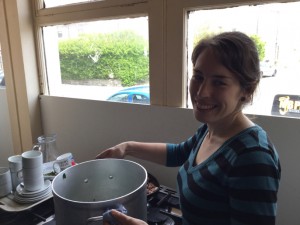 Last Saturday I was invited to run a local food stall at a ‘slow food Saturday’ event at Saint Thomas’s.

Throughout the morning several groups of children and adults learnt how to make hot cross buns. In-between key tasks (kneading the dough, leaving the dough to rise, creating buns, leaving the buns to rise, creating crosses with flour and water paste, cooking the buns in the oven and glazing the cooked buns); people sat, drank tea and coffee, ate home-made cake and chatted.

The whole event addressed the need to make food, and the cooking and eating of it, more social.

I asked Ian Dewar, chaplain at the Royal Lancaster Infirmary, why he was involved in organising such an event. He responded:

“For three key reasons: first of all the event raises the profile of the ‘live simply’ group in church, which is striving to raise the importance of addressing environmental issues. Secondly, you can’t save and protect the environment until you learn to love life. Loving food is an important part of loving life. And finally, it’s fun!”

Over the last few weeks I have realised the great importance of making food social, whether that be the growing, cooking or eating of it.

For example, I spent a day with students at Lancaster University, talking about eating habits and barriers to eating more healthy and sustainable food. Stress, socially-challenging situations (especially in the first year of study), hang-overs, boredom and a lack of cooking skills were all found to lead to the buying of takeaways or eating of processed foods. Encouraging and supporting students to communally cook and eat- whether in halls of residents or around campus- was suggested as a means for increasing healthier and more sustainable eating habits. It was also suggested that making food social was a great way to offer non-alcohol focused events and to help tackle increasing rates of mental health issues on campus.

The Growing Our Local Food Economy (GOLFE) project has also found that people living on their own often find it harder to motivate themselves to cook from scratch when they are only feeding themselves. They tend to end up eating more processed foods compared to people living in a shared house who use cooking as a social event.

And from experience, community food projects that focus primarily on the production of food, tend to neglect the social aspects of the project, resulting in people leaving.  As soon as you create the space for socialising and discussions, understanding and friendships grow and the project and its community strengthen as a result. 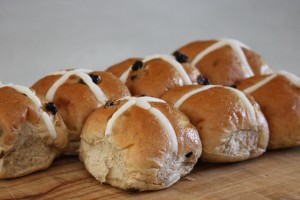