The Feeding Body and Soul exhibition is currently on display in four venues across Lancaster (The Storey, The Radish, Roots Cafe and Cornerstone), until the end of September. 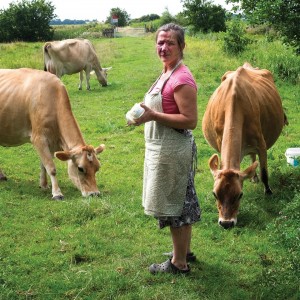 Each venue explores a different theme, but the exhibition overall tells the story of small producers who have rejected globalised, factory-scale food production. They have instead chosen to become community growers and farmers, producing food in a way that is kind for the earth, people and future generations.

The key theme at the Storey is women in farming – the ‘invisible’ workforce – as the exhibition wanted to challenge stereotypes around farming and highlight the role women play within the sustainable farming movement.

Historically women have always played an important role in farming, albeit often unpaid, undervalued and silent.

From the stereotypical ‘farmers wife’, to supporting unpaid farm tasks and picking up food production in moments of crises – war – women have formed the backbone of many rural economies; helping to keep communities fed.

Women make up approximately half of the agricultural labour force in the majority world, but barriers to credit, agricultural inputs and extension services, as well as land ownership and rights, limit their production and financial autonomy. Many of these barriers, plus stigma around traditional gender roles, have also prevented women from taking on a more prominent role in UK farming. This situation, however, is slowly changing.

Improved access to agricultural training and advancements in appropriate technology are allowing women to take on more ‘visible’ roles in farming. This is also supported by the breakdown and evolution of traditional practices associated with land inheritance, business ownership and gender roles; challenging the ‘strong’ male stereotype often associated with farming.

‘Women now make up one third of the UK agricultural sector’s traditionally male-dominated workforce, having increased by 7% over the last decade’1.

The series of images in the Storey explores the roles women currently play in supporting the sustainable agriculture movement in the UK.

Often without a farming background, they grow and produce food with passion borne of environmental activism and which sees them living outside the values of a consumerist society. Their scale is small and local, their output and methods diverse and collaborative, wildlife is encouraged and there is compassion for livestock.

Walter Lewis spent over a year visiting more than 100 of these ‘new wave growers’ to form feedingbodyandsoul.com

We would love to hear your thoughts on the exhibition: what you enjoyed and learnt, and what could be improved. You can provide feedback by visiting: www.surveymonkey.co.uk/r/feedingbodyandsoul