A couple of weeks ago I spoke to Rory Walker from the Borough Brewery in Lancaster. 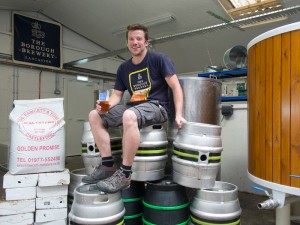 What key events lead to you brewing beer?

“About 5-6 years ago I was home brewing with friends. On a  couple of  occasions we started home brewing because the  weather was so appalling  that we couldn’t go for a walk in the  lakes. And it went from there really”.

I was trying to set up a brewery with those friends but life took its  route,  and they both moved away and set up in different places.  At the time I  was working on the bar at The Borough. And  Hannah, who runs The  Borough, suggested we have a chat about  us starting a business together.  That was November 2012. Within about six months of that conversation with Hannah, we were up and going”.

Tell us a little more about the Borough Brewery.

“It is a small brewery producing 20 casks a week, so we have to brew regularly to meet demand”.

“I make three core beers. One is a Pale (3.7%), with lots of American hops – the full flavoured, grape fruity ones. I make a Bitter, which is a traditional English Bitter style at 4%. And I do a seasonal dark. At the moment there is a Summertime Dark (4%), and we do a Wintertime Dark (5%) – it’s more like a stout, a bit heavier. And then I make a number of seasonal beers as well. At the moment it’s a Kilimanjaro, which is session bitter. It’s called Kilimanjaro because a gentleman called Shaun Gash just pushed himself up Kilimanjaro in a wheel chair – raising money for a local charity. So The Borough and The Borough Brewery have been able to support him.

So why did you move out of the Borough Pub?

“I had been brewing in the cellar of the Borough for 3 years and we were ready to expand and needed to find extra space. The Borough is a fantastic, busy pub. I’d managed to find myself a little corner in there when we set up. But the chefs, wanted their storage space back!

We recently found and renovated a new brewery and, with the purchase of a new fermentation tank, we can make more beer!”

Rory features in the ‘Faces Behind Our Food’ exhibition which launches on the 20th October 2016 in the Storey. We invite you to come and see the exhibition and find out more about your local food and drink producers. See www.facebook.com/FoodOfLancaster for more information. 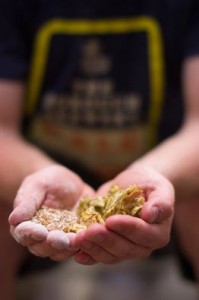