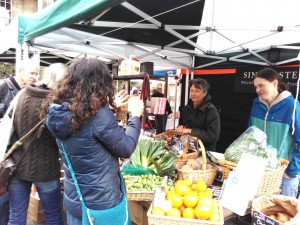 The next two weeks mark the national ‘love your local  market’ campaign – from the 17th – 31st May. The  campaign is coordinated by the National Association of  British Market Authorities and started in 2012 following  recommendations in the Portas Review that a National  Day of Markets be created – to celebrate Britain’s  markets and small local traders, and encourage more  people to have a go at market trading. This proposed  national day has now become an annual fortnightly  celebration.

According to the campaign’s website, www.loveyourlocalmarket.co, an international ‘love your local market’ movement has now emerged, covering more than16 countries. In the UK alone over 1100 markets were said to have participated in the campaign in 2016; 10,000 people have tried their hand at market trading since 2012 (when the campaign first launched), and around 1500 new businesses have been created as a result.

Lancaster’s street market has a long trading history – dating from 1193, when the Borough was first granted a Charter. The market would have once been the heart of the local community – connecting people to each other, to the available food and to the land. Apart from catching up on gossip, townsfolk would know first-hand if it had been a bad year for apples or bees or if the grazing was poor.  The connections between people themselves and the land would have been very strong and alive.

Although the market continues to play an important role in bringing people together and for offering access to food, it has shrunk in size, the number of local food traders is low, and the old indoor market is now a Primark! Most people now buy their food from supermarkets and as a result many have lost touch with the seasonality of our food. The modern-day supermarket is arguably about as disconnected as possible from real-life with packed goods stacked high, sourced from who knows where and grown by who knows who.

Lancaster City Council are supporting the ‘love your local market’ campaign through offering free stalls to local traders in the Charter Market, the indoor Assembly Rooms and the covered Festival Market in Morecambe.

During the fortnight you can also support the campaign by getting to know your local market and by letting the stall holders and the council know how much you value the market. When did you last stroll through the stalls and notice how many exciting new businesses have emerged? From Jamaican and Greek food through to vegan takeaways and local woollen products- Lancaster’s market has some great traders.