How the Fairtrade town movement began…

The Faces Behind Our Food exhibition has now moved to the Pavilion Café in Williamson Park. One of the producers featured in the exhibition is Bruce Crowther from the Fig Tree, and this week’s column reveals a little more of his story and how he came to initiate the Fairtrade town movement. 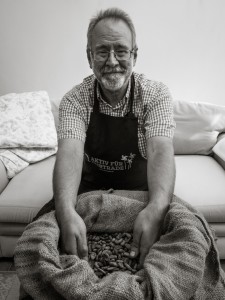 “I qualified as a vet in Liverpool, and then I got involved with  Oxfam after Live Aid in 1985.  I campaigned with Oxfam for many  years throughout the nineties. When I came to Garstang we set up  the Oxfam group in Garstang.  We started campaigning a lot on  fair trade, which became quite a bit of an important issue for us.”

“And then in the year 2000 we had this idea to invite everybody to  a meal where we gave them a meal of fair trade products and local  produce.  It is very important to us that farmers in this country  also suffer from not getting a fair price for their goods too.  So we  invited people to a meal of local produce and fair trade, and we  asked them not to give us any money, we didn’t want money.  We  gave them a meal and when they felt a bit bad, because people  want to give something when they come to a meal like that, we asked them to sign a pledge form saying that they would support buying fair trade products and local produce when they could.”

“So we did that and we ended up getting everybody signing the pledge form.  We ended up getting 95 percent of all the businesses, the Council, the Council came on later, I have to be honest.  We got all the schools, the churches, all signing this form.  So then we had this idea that we had in effect created a fair trade town.  So in April 2000 at a public meeting the people of Garstang, not the Council, declared Garstang the first Fairtrade town in the world.  This immediately opened up a can of worms.   We had people coming from Australia, from Japan, to see what was going on. This first Fairtrade town in the world – what does it mean?  We didn’t know at that time what it meant, but we worked with the Fairtrade Foundation and we were officially declared [a Fairtrade town] in 2001.”

To read Bruce’s story in full visit his page on the online exhibition.

If you visit the Faces Behind Our Food exhibition or view it online please let us know your thoughts by filling out an evaluation form, available here: s.coop/25mvz