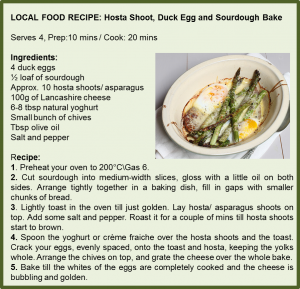 I have recently become more   aware about the impact that food miles have on the environment. But as someone who is relatively inexperienced when it comes to eating sustainably, I have never explored the realities of eating locally sourced food.

To challenge myself I thought I’d attempt to make a meal using only local food. I thought it would be a good way to learn about the local and seasonal produce of Lancaster District, and would perhaps motivate me to take GOLFE’s Local Food Pledge!

As May is National Asparagus Month, I thought I’d try making an asparagus-based dish. However, whilst sourcing my ingredients I found there was no local commercial grower of asparagus (due to a tough local growing climate!) The only local asparagus available to me was on a friend’s allotment and it was not quite ready… What to do?

I was offered some Hosta shoots instead as apparently they could be used in a similar way to asparagus!?

I decided to adapt my recipe and give the Hosta shoots (hostons) a try!

A quick internet search brought up some interesting Hosta related information. Although many people think of it as a house plant, Hosta can in fact be cooked and eaten in a similar way to asparagus. Species recommended for eating include Hosta: crispula, longipes, montana, plantaginea, sieboldii, sieboldiana, undulata and ventricosa.

So the meal I ended up making was a Hosta shoot, duck egg and sourdough bake. The duck eggs were bought from Billy’s Free Range Eggs at Lancaster outdoor market, which came from a farm near Over Kellet. The sourdough was handmade at Filbert’s Bakery on King Street. While the original recipe I (vaguely) followed suggested a sprinkling of parmesan cheese over the top of the bake, I opted for a local alternative – Mrs Kirkham’s Lancashire cheese. This was also bought at the outdoor market. The Hosta shoots came from Ambleside road allotments, where I also got a handful of freshly cut chives. The chives went really well with the Lancashire cheese!

After buying my ingredients I compared the prices with the cost of similar but non-local products from Sainsbury’s. I found that while individual products such as eggs and cheese were a little more expensive when bought locally, I had made overall savings from getting the Hosta shoots and chives for free (thank you Ambleside Road Community Allotment)!