I entered 2017 feeling very inspired after attending the Oxford Real Farming Conference (ORFC) – a much needed boost considering the political challenges facing us this year!

The ORFC is an annual sustainable and organic food and farming gathering that challenges the National Farmers Union’s (NFU) support for industrial farming – farming that favours bigger farms and high-tech solutions at the expense of ecologically sound farming practices and diverse smallholdings.

Although the Real Farming Conference is held at the same time as the NFU’s annual gathering, its aim is “not to attack the status quo but to look ahead –  to ask what the world really needs, and what’s possible, and to show what really can be done.“

It does this in a wonderful way by bringing together commercial organic farmers, community projects, campaigners and researchers to discuss practical solutions that can be implemented in our communities now, whilst also planning for the future and the challenges ahead.

One of the highlights of this year’s conference for me was finding out about the many seed-saving initiatives popping up across the country- including the UK’s community owned seed company, the Seed Co-operative.

The need to save open pollinated seeds is often an overlooked topic even though they play a vital role in supporting a sustainable food future.

According to the Seed Co-operative, “the biodiversity of agricultural seeds has reduced by more than 90% since 1900 and seed sales have been concentrated within a small group of global corporations (just five businesses sell 75% of the world’s seed!) The use of F1 hybrids and modern breeding techniques have taken work related to seed out of the hands and farmers and largely restricted it to laboratories”.

Saving and conserving open pollinated seeds that are adapted to local environmental conditions can help in countering this depressing trend of reduced biodiversity and the privatisation of our seeds. This is why Lancaster’s seed library was launched last year, and it is why a few people have been growing and saving seed at Claver Hill – a local community food project.

If you would like to find out more about seed saving, come to Lancaster’s Potato Day on the 28th January, from 11-15:00 at the Friends Meeting House on Meeting House Lane. Lancaster’s seed library is organising a seed swap and will be sharing a range of open pollinated seed with local people who want to start growing and saving their own seed. This will include quinoa seed which was grown and saved at Claver Hill last year. 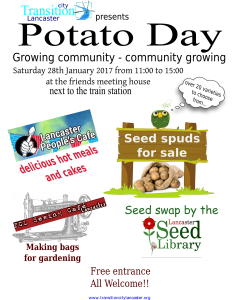