When talking about resilient food systems ‘diversity’ is key.

Diversity is important when talking about seeds, growing systems, community skills, approaches to distributing and cooking food, the people involved and approaches to healthy and sustainable diets.

Around Lancaster we have a great range of projects seeking to increase the diversity of our local food system.

For example Backsbottom Farm near Wray has developed an agro-ecological system that sees sheep grazing under a collection of around 200 heritage apple varieties. The surrounding woodland is managed for biodiversity, with the River Roeburn winding its way through ancient, semi natural woodlands (which are a SSSI), hay meadows and heritage orchards. The farm also has a mature forest garden which is fantastic for getting lost in! 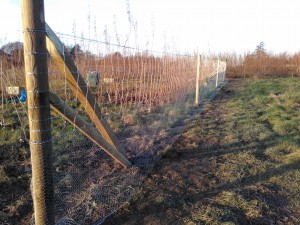 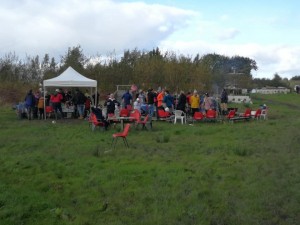 Transition’s edible plant nursery aims to raise a range of fruit trees and bushes which are then given to community food projects to plant in public spaces around the district – supporting our vibrant community food movement. As part of this work a number of local heritage fruit varieties are being cultivated and grafting skills are passed on to budding new growers.

Transition’s nursery currently has a number of fruit trees in need of homes (Trees should ideally be planted during the winter months). If your street, club, school or church would like to start a small community orchard, please get in touch by emailing clayton.anna03@gmail.com

Lancaster’s seed library is cultivating diversity by developing local skills and a network around seed saving – creating a variety of locally adapted seed for sharing and growing. 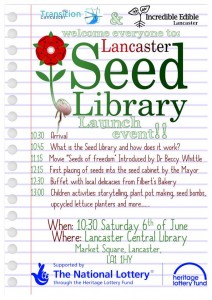 A number of raised beds at Claver Hill are given to growing plants specifically for seed, including quinoa, rainbow corn, beetroot, dill, white poppies, giant sunflowers and a variety of beans. Once the seeds have ripened they are collected, dried and sorted, and are then put in the seed library cabinets in Lancaster’s central library. Local growers can then borrow and swap this seed with some of their own saved seed. This initiative is currently in need of support, so if you are interested in helping email dennis_toul@yahoo.gr

Alternatively you could attend Lancaster’s annual Potato Day on Saturday 25th January at the Friends Meeting House. The seed library will be there along with a range of organic seed potatoes, community food stalls and a world food cafe. Rod Everett of Backsbottom Farm will also be exploring the idea of ‘resilient food’ further, sharing a resilient food check list he has developed.