On the 6th of January, people around the world celebrated Apple Tree Day.

Isn’t it amazing how a fruit originating from the Kazakhstan region has come to be loved globally?

Apples may be seen as an English fruit by many, but in fact only started to be grown in the UK as a cultivated crop since the Roman occupation. Apple cultivation in the UK then suffered for many years due to invasions by the Jutes, Saxons and Danes; and later due to the Battle of the Roses and the Black Death.

We now, thanks to the help of many dedicated horticulturalists, botanists and gardeners, have a wide range of English Apple varieties such as the Bramley, Egermont Russet and St Edmunds Pippin. Also, the UK is apparently the only country that grows apples especially for cooking! 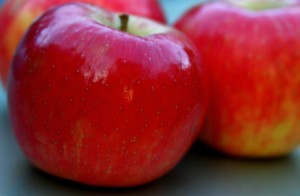 mainly down to our wet and cool climate. A wide range of local apple varieties can be admired, tasted and purchased from the Middle Wood Trust and Backsbottom Farm in Roeburndale West; a beautiful but hilly one hour bicycle ride from Lancaster. We also have a number of community orchards around Lancaster where you can sample apples for free in the autumn. The Ridge community orchard, the Ridge Green and Fairfield’s millennium orchard are just a few.

Every year Transition City Lancaster hosts a tree grafting workshop in March, normally at Piccadilly Garden Centre. These workshops allow for the historic art of apple grafting to be passed on to new and keen gardeners and growers. You come away with a feeling of satisfaction, a fruit tree or two and a painful finger!

Another upcoming apple related event: Wassailing. On the 17th January from 3-5pm Fairfield Association are hosting this traditional Old Twelfth Night celebration at their community apple orchard off Sunnyside lane. Apple tree wassailing essentially involves drinking to the health of apple trees and making a lot of noise in the process- to wake the tree spirits and scare off demons. The Fairfield Association website states: “bring drums, pots and pans to bang and clatter as we process through the trees. All ages are invited to come dressed as the Oak King or the Apple Queen. Traditional offerings of toast and cider will be made to the trees. Traditional Wassailing songs taught and performed. There will be dancing, the passing of the Wassail cup and a bonfire.” I hope to see you there!