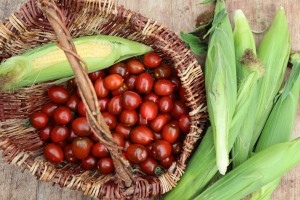 Over the past year I have learnt about many fantastic projects that are trying to cultivate food whilst nourishing soils and communities. However Sfruttazero – based in the South of Italy- is one initiative that really stands out for me. It is holistic and humble in its approach to offering a practical ‘alternative’ in a horticulture industry entrenched in human exploitation. Put simply, it is turning the tomato from a symbol of exploitation to one of hope.

‘Sfruttazero’ (‘Zero exploitation’) is a natural tomato sauce that is grown using agro-ecological farming methods. It’s produced by Diritti a Sud (DaS) in collaboration with the Association Solidaria in Bari and has resulted in job contracts for 25 people (including unemployed Italians and African migrants).

During a workshop at this year’s Spring Prize event, Giovanni and Angelo (two members of ‘Sfruttazero’) explained how

“conventionally, people are paid based on boxes of tomatoes they fill. If a box weighs 350kg they are paid 3.5 Euros. At the end of the day a strong worker can fill 6 crates. It’s inhuman. Workers have to pay to go to work, and for food. So 8 Euros to go and and come back from a 15 hours work day…We pay per hour and respect the collective contract. 5-6 hours a day maximum. In summer it can get to 45 degrees – we don’t work in that. We pay everyone the same and offer an insurance and pension contribution. This is the only model that should exist”.

A proportion of sales from Sfruttazero also goes towards a fund for supporting the struggle of migrants that still live in Southern Italy’s ghettos.

In terms of distributing the tomato sauce, DaS are supporting the development of solidarity economies.

“From the beginning we decided we were not going to distribute to big retail. We wanted alternative distribution. In Italy there are solidarity purchasing groups – groups of families that decide to respect certain criteria, conditions and environmental”.

Alongside ‘Sfruttazero’ DaS supports the development of a multicultural society through encouraging the meeting and exchange of different cultures – such as through cooking lessons, living libraries, a free Italian language school for migrants, and other public event. It is comprised of people from different generations, social and cultural backgrounds and believes that “differences are a richness”.

At a time when governments are trying to divide people ‘Sfruttazero’ has decided to go against the current and bring people together – offering alternative models of society as well as production. Its scale is small and replicable and the people involved are passionate and determined. It offers an inspiring example of what can be done when a group of people come together to co-create a new fairer food system.