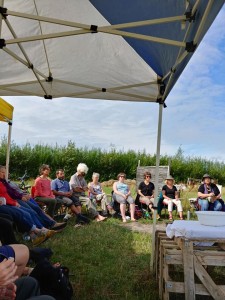 Rather than focusing on soil science- on how acidic or alkaline the soil is- the workshop encouraged participants to spend an afternoon observing and exploring Claver Hill’s physical environment and soil.

People were encouraged to feel, taste, smell and look at different soils in detail, using all senses. In doing so we found the soil to be very dry in places, and full of shiny fragments- possibly mica. Soil taken from mole hills was moister and smelt of fungi, whereas soil from the surface of Claver’s no-dig beds smelt of onions and other crops and was much drier. Bare soil was hotter in touch compared to soil that was covered by growing plants etc.

A number of questions were asked, including: ‘what does soil mean to you and what is it’s role in your life?’. Answers to this question included ‘dirty nails’, ‘life’, ‘sh*t’, ‘mysterious’, ‘muck’, ‘community’…highlighting the different interactions people have with soil and the great outdoors. Some people felt absolutely no connection with soil, whereas others regularly interacted with soil and had a spiritual connection with it.

Starhawk’s approach to learning about soil comes from a belief that peoples’ disconnection to the world around them, to the earth and social power structures, is a key factor in driving ecosystem degradation. By this I mean, people living in ways that contribute to biodiversity loss, damaged soils, climate change and reinforce exploitative power structures etc. without being fulling aware of their impacts on the world around them, and in turn the impacts of a damaged environment and social systems on their own health.

Starhawk believes there is a need to develop a spiritual connection with our surroundings in order to cultivate respect for the earth. In doing so, we grow to understand the importance of the earth, its role in our lives, and the need to ‘tread lightly’. This philosophy draws on ideas from Ecofeminism, which argues that our male dominated society has driven a relationship with the earth that is exploitative– as seen by the uncontrollable use of finite resources and locally with fracking. Ecofeminism calls for a different approach to understanding ecology; one that understands humanity’s reliance on the natural world and respects organic processes, holistic connections and collaboration.

Starhawk draws on Permaculture as a framework for supporting this approach; describing it a “system of ecological design, a set of ethics and principles that guide us in developing human systems that can meet our needs while regenerating the natural environment around us.”