Over the past week I have met a variety of different local food and drink producers; learning about their work and how they ended up doing what they do. All of these diverse stories will be shared as part of the ‘Faces Behind Our Food’ art exhibition – which launches on the 20th October 2016 in the Storey Institute, and will tour Lancaster’s cafes and art venues until May 2017.

So far this work has resulted in us photographing and interviewing Rory Walker from the Borough Brewery; Alan Schofield from Growing with Nature in Pilling; Filberts Bakery in Lancaster, and Gary Troughton – a beekeeper based in Dolphinholme. Only one photo shoot has been cancelled so far – due to an emergency straw bailing session!

Also included in this exhibition is Ray Edmondson, a Morecambe Bay shrimp catcher, who sells his local catch in Edmondson’s fish shop on Yorkshire Street, Morecambe. 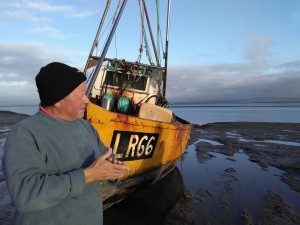 In order to meet up with Ray, a 6:15am Sunday morning cycle ride to  Morecambe Bay was required, during which I watched as the moon set in  the west and the sun rose in the east.

As the tide was out, John Bean (the Faces Behind Our Food  photographer), Ray and I had to squelch through the sticky silt and mud    to reach Edmondson’s boat (which it turns out he has made himself). This  sticky substance turned out to be a key topic of our early-morning  conversation.

Ray talked about how, as a result of installing sea defences, the natural movement of silt and mud along the shore had been blocked, resulting in it building up over time. He pointed out the change in ground height caused by the build-up of silt, which can be seen by walking along the stone jetty whilst the tide is out.

Ray discussed how the accumulation of silt had-had an impact on where boats could dock, in addition to it changing the shape of the channels in Morecambe bay. This has affected where the few remaining fisherman can go and fish. 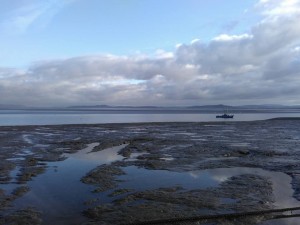 This silt, in addition to several other local challenges discussed during the  course of the morning, has resulted in fewer and fewer fishermen in the  Morecambe area. The conversation ended with the sobering thought that  the local fishing industry may cease to exist altogether unless things  drastically change to make fishing easier and a more desirable career.

You can keep up to date with the ‘Faces Behind Our Food’ project as it  progresses by liking the ‘Growing Our Local Food Economy – GOLFE  Lancaster’ Facebook page.