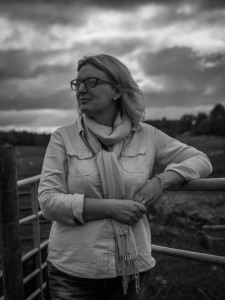 “At a European level they changed the rules for pig keeping which  meant that they wanted pigs outside all year round…Which is great  in the South of England, not so great in the North of England,  particularly in the Lune Valley, where our topography is such that  when it rains it just all pours down the hills into the River Lune.    And part of being sustainable is obviously the land, so managing  the land and making sure we do not destroy the topsoil.”

“We talked to the Soil Association about this, because it literally  changed overnight, and their answer to this, sadly, was to put them  on concrete.  We were shocked to say the least because that’s not a  natural habitat for pigs. And the way it worked before, just to give  you a bit of background, is they were outside for most of the year (so as long as was sustainable if you like,  for not damaging the land), and then they would come inside, but within their rules.  So they had enough space, they had natural light, they had fresh air…  So it was situation where the pigs were happy and the land was happy.”

“We could not envisage happy pigs on concrete. We actually spoke to our vets about it and they said no, because…our rainfall… they’d be stood on wet concrete, let’s be honest, we don’t get a dry winter here do we?”

“We could have carried on being organic for three years after this ruling came out, because you can have what are called non-compliances, but we didn’t want to go down that route…We talked to [the Soil Association] about taking the pigs out of organic registration…and farming the rest of the land as organic but not the pig…They wouldn’t do it.  So that’s why we came out. It was as simple as that.”

“What was hard was, we learned that in Europe although it was a European directive, a lot of countries weren’t taking that directive forward.  So although the Soil Association…were taking that forward, elsewhere within Europe they weren’t.  So what was sad to hear, and this was from customers, was that they knew were buying organic sausages in supermarkets which was made using pork from Germany that was still being able to do it as we were.”