I recently participated in a ‘collaborative group enquiry’ into the ethics of food with an unusual group of people – not the usual crowd of food campaigners and activists that I have become accustomed to!

This ‘Faith in Food’ weekend, hosted by the Quakers at Woodbrooke in Birmingham, was attended by a number of people who had difficult relationships with food: some had spent a lifetime struggling with negative body image issues; others suffered from diabetes and others were struggling to witness their children getting teased by fellow class mates for not eating sugar. Some viewed food from a strictly nutritional point of view and others had a spiritual connection to food and its links to broader environmental and social justice issues. Because of this diversity, the group’s exploration of the ‘story of food’ was brilliantly moving and thought provoking.

The weekend started with the mapping of our ‘food story’ – from the dawn of agriculture to today – noting key moments that have changed how food is produced, distributed and eaten. 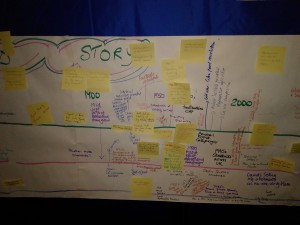 As part of this exercise the local, national and international food   story were explored. It was surprising to visually see just how   much has changed in the last 100 years or so (since the   industrial revolution and the world wars), with the role out of   industrial farming techniques; the development of plastic   packaging and the supermarket; the increased reliance on   imported goods, and emergence of large multinational food   companies.

We then explored: what injustice and suffering has been caused by this dominant food story?

Peoples’ fears, anger, grief, hope and sense of emptiness at the dominant food story were shared. Tears were shed for the current mass extinction of species and the damage we have done to the world’s soils and oceans. Fear for climate change’s challenges were shared, and people expressed anger at the lies food companies tell through advertising, and the lack of political will to allow a more sustainable food system to emerge.

We then moved on to explore the ‘new food story emerging’ – looking at case studies where various organisations are starting to create holistic sustainable food systems that work in harmony with the earth, people and other species. 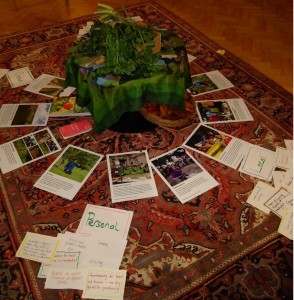 We discussed the need to stop further damage from being done,   whilst recreating new food systems and re-telling the story of   humans’ role on the planet. This lead onto the development of   personal action plans for supporting the new food story to   emerge.

Through exploring food justice issues as a group; using our   minds, hearts and spirit, great insight was shared.