Dreaming of a Lancastrian quinoa

Dennis Touliatos, a PhD student at Lancaster University and a member of the Lancaster Seed Library, talks about his seed saving plans for this year.

As a keen gardener and a foodie, I have always been interested in growing (and eating)  exotic plants. I guess what excites me most is the challenge of growing something unusual  and the possibility of discovering something unexpected. And as there is a range of exciting  and not widely grown plant species to choose from, otherwise known as ‘underutilised  crops’, there is a lot to get excited about!

One of these underutilised crops is Quinoa, pronounced ‘keen-wa’, which belongs to the  same family of plants as spinach and beetroot even though it looks more like couscous or  rice”. 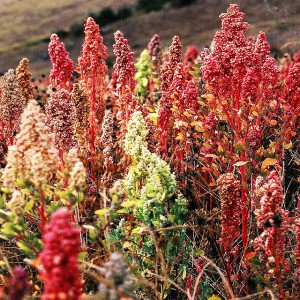 Quinoa seeds don’t contain any gluten and have approximately twice the protein content of  rice. They are also rich in essential amino acids and have a balanced content of fibres,  phosphorus, magnesium and iron. In short, Quinoa is very nutritionally good for you!

Quinoa has been grown high in the Andes for thousands of years and is the staple food for  many Peruvians and Bolivians. However, due to its high nutritious content, worldwide  demand for quinoa has massively increased over the last few years. This has resulted in the  price of quinoa increasing, making it too expensive for locals to afford anymore. Imported  and nutritionally poor junk food is now often a cheaper alternative to quinoa for many  Peruvians and Bolivians.

One of the main causes of this quinoa crisis is the current global economic model.  However, growing quinoa here in the UK and Europe has been proposed as one potential  solution to address this issue, as it may reduce the pressure on exports in Peru and Bolivia, potentially dropping the price of quinoa. And this is exactly what the Lancaster Seed Library and the Claver Hill community food project plan to do!

This growing season, we plan to grow two different varieties of quinoa at Claver Hill to find out which one grows best in Lancaster. As both varieties of quinoa are ‘open pollinated’, we can also save their seed. We will then distribute this seed for free through the Lancaster Seed Library – providing it to anyone who wants to grow locally adapted Lancastrian quinoa plants.

However, if you can’t wait for Lancaster’s quinoa harvest, and you have an urge to eat this nutritious crop ASAP, you can always buy British grown quinoa at Single Step – a wholefood cooperative located on Penny Street in Lancaster.