Sunday 27th November is Lancashire Day; a day that commemorates the moment in 1295 when the first elected representatives from Lancashire were called to Westminster by King Edward I to attend what later became known as “The Model Parliament”. It is a day when we should celebrate Lancashire and the wealth of culture and history in the area. And no celebration is complete without great food – including locally produced food and drink.

Lancashire has a fantastic array of local food and drink producers, as displayed on LESS’s online local food directory, and some of which feature in The Faces behind Our Food exhibition. See www.foodfutures.org.uk for more details about both. You can also find a number of local food recipes on the LESS blog, including a Lancashire tortilla, winter apple and squash panzanella, roasted pumpkin seeds, spiced parsnip shepherd’s pie, and beetroot and walnut humus. If you have a favourite seasonally-inspired recipe that can be made using local ingredients, why not share it with us?

If you miss Lancashire Day celebrations (which can be found on the Visit Lancashire website www.visitlancashire.com), don’t worry- there are still plenty of opportunities to celebrate. The Faces Behind Our Food exhibition will be moving from the Pavilion Café at Williamson Park to a number of other local cafes to create an art trail around Lancaster. The stories and photographs of 12 local food and drinks producers will be on display at the Radish, the Whale Tail, Roots, and Wilde and Well Read throughout December 2016 and January 2017.

On the 2nd December we will be celebrating the launch of this art trail at the Radish- as part of the First Friday series of events. From 5-8pm the Radish will serve an exclusive First Friday special to celebrate The Faces Behind Our Food art trail. And from 7pm The Turtle and the Marsh will play seasonally-inspired folk rock at the Radish. 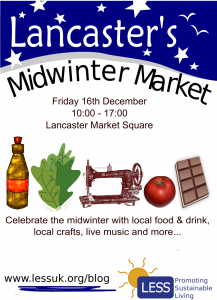