It’s hard to believe, with all the sunshine we’ve had this month, how much mud there was at the beginning of April. Back then we were trying to dry out the ground, pulling back the black plastic off our covered areas for a few hours, to air the soil in the sun. Now, one of our main, and very enjoyable, jobs on both sites, is watering. Our seedling trays over at the White Lund polytunnel, and the young seedlings getting established in The Plot, are particularly vulnerable to drying out, until their roots grow deep enough to better fend for themselves.

Many of the seeds we sowed in March became ready to plant out in April. The peas are pretty hardcore, but with the temperatures still freezing at night in the first half of April, many of the others needed a bit of protection. The plot sprouted micro-polytunnels over the salad crops, and fleece and mesh blankets over our tenderest brassicas. 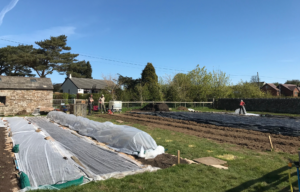 Laying down black plastic is great for killing off plant life underneath, but on our site, it also created a wonderful playground/breeding ground for voles. They skitter out of sight each time we whip the plastic off to work on an area, doing that zig-zag ‘can’t catch me’ run. Around mid April, they couldn’t take any more or maybe it was too warm? Either way, they’ve resettled elsewhere.

More mammal excitement in the last week of April as the team watched the birth of a calf! On the far side of The Plot is one of Old Holly Organic Dairy Farm’s holding areas for first time cow mothers, where they put an experienced older mum in with a ‘Newbie’. All went well, and at 3.30, all the other cows, trooping past to be milked, were stopping to have a good look at the newcomer too.

That afternoon parade of cows into the milking parlour is a real highlight of the working day, and in fact, The Plot is a wonderful place to see all kinds of living things. Birds (blackbird, robin, plover, wagtail, sparrow hawk…), insects, lots of lovely worms and luckily so far, no rabbits.

Two big changes to the site have disturbed all the local wildlife. The first was the visit of Jarvis, with his handmade and hand held disc harrow. He visited twice, going across the area left to right and then a week or so later, top to bottom. We are now in the process of creating smooth beds, with a nice tilth, out of the remaining lumps, using a fork, a rake and ‘gentle persuasion’! The second was a full day of turf cutting – heavy but satisfying work. The rolls of turf are now piled up and plastic covered, ready to rot down and add back to the plot at a later date.

Over at the White Lund polytunnel, we have been preparing the ground for our indoor crops of tomatoes, cucumbers, French beans, a few courgettes and basil. The roof is quite high (around 4 meters up) and we’ve been coming up with ingenious ways to create support for the climbing beans and tomatoes. The soil hasn’t been used in this way for a while, possibly ever before, and it is looking a whole lot better for the attention. 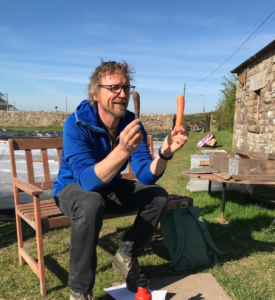 We had a great ‘on plot’ lecture in the sunshine about Organic Growing Standards, which James, an experienced local grower, made much more interesting than it initially sounds. Organic standards are exacting and high quality and have legal status. This is different from other food produce ‘quality marks’ standards, and you cannot legally use the term Organic for your produce without meeting them.

Finally, we have had lots of lovely volunteer help this month. They have been seed sowing, bed- making, planting raspberries and gooseberries, demolishing unwanted fencing, digging out docks and nettles and much more; everyone energetic and cheerful, in all weathers, so thank you all!