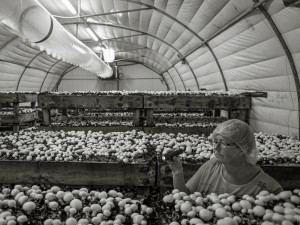 Whilst interviewing local food producers for the Faces Behind Our Food exhibition, it became clear that Brexit was going to have big implications for our local food and farming industry. The question was, what would these implications be?

The potential impacts on farming subsidies were discussed by a number of producers, as was the loss of good workers. For example, during our interview with Thornton Meadows mushroom farm it was clear that migrants had offered a reliable and hardworking workforce for years and that there were now signs that people were starting to return ‘home’. Whether this was due to the Brexit vote was unclear, but at the time of the interview, Thornton Meadows was advertising for a new employee for the first time in years.

A recent blog on the Food Research Collaboration (FRC) website discussed the importance of migrants in supporting the UK food and farming industry. It discussed how migrants were essential in a range of food industries, from “fruit pickers in the strawberry fields of Scotland, warehouses full of vegetable packers in the East of England, Lincolnshire factory line workers checking M&S chocolate eclairs, the cashier at the corner…”

It read: “Migrant workers are crucial in making sure food makes it to our plate how and when we want it. But in return they [the workers] get a pretty raw deal. In many cases the jobs we are talking about are back-breaking, badly paid, precarious and even highly exploitative. So while we celebrate the contribution that migrants make to our economy we must also recognise that these choices are not made entirely freely. These are difficult jobs that people generally do out of necessity, not passion. It’s not an ideal system – we should be working towards a future in which all work can pay well, give people autonomy and feel meaningful. But the first step down that path does not involve depriving migrants of economic opportunities; the first step is organising those workers to demand better conditions for themselves.”

And it is perhaps because of these hard working conditions that so few young Brits, and people in general, aspire to become farmers. According to the FRC blog, currently “no more than a sixth of seasonal agricultural work, like fruit-picking, is undertaken by British workers.”

So if the Government continues down a road where migrants don’t even feature in the vision for the UK’s future, how exactly are we going to feed ourselves? And how are we going to make farming a career people aspire to do?